This is the first in what will hopefully be a series of posts that explain or hypothesize why certain names came into existence or exploded in popularity.  Today’s post examines three trendy girls’ names as of late: Harper, Madison, and Peyton. Have you ever wondered where those names came from?

While I don’t have the exact answer behind Peyton and Harper, Madison as a girls’ name owes its existence almost solely to the 1984 movie Splash. Daryl Hannah plays a mermaid who ends up in NYC and upon seeing a sign for Madison Ave, decides to name herself Madison. And viola- suddenly babies across the country were being named Madison. As the below chart shows, prior to 1984, pretty much no females were named Madison.  In 1984? 42. 1985 saw a whopping 299 and it just grew from there. There are some male Madisons out there- it averaged about 34 a year from 1880-1983. There’s Madison Bumgarner, a Major League Baseball pitcher, and Madison Hildebrand, who starred as a realtor on the reality show “Million Dollar Listing.” Madison Bumgarner was born in 1989, so I wonder how he feels having a girls’ name. I would love to interview girl Madisons born before 1984 to learn why they were named that, like did their parents just like it? Were they conceived in Madison, Wisconsin? Were the parents just trying to be unusual or give their daughter a strong, masculine name? Back in the 70s and early 80s, I’m sure a girl being named Madison would have been strange to many people. I wonder what their parent’s reaction was to Madison’s exploding popularity- something they could not have predicted.

Peyton was piddling along as a rare girl name until a movie also catapulted it into fame. In 1992, there was a drama/thriller called The Hand that Rocks the Cradle that had a female character named Peyton. I went to high school with a guy named Peyton and most Americans are familiar with NFL player Peyton Manning, who was born in 1976 alongside just 37 other male Peyton/Paytons that year, but just today while in a store I heard a woman call after a little girl named Peyton. So is it assigned more to boys or girls? Originally, it was all boys, but in 1992 the girls took the lead (719 to 448, including spelling varieties) thanks to the movie and have held it ever since. 2013’s tally: 7387 girls to 2342 boys.

On the 1995-96 season of the super popular NBC show ER, a female character named Harper was introduced and often played opposite Noah Wyle’s character Dr. Carter. The name is definitely on the rise and a few celebrities have named their daughters Harper, including Victoria and David Beckham, the Today show’s Jenna Wolfe and Stephanie Gosk, and Tiffani Thiessen (aka Kelly Kapowski from Saved By the Bell). Not surprisingly, the name is originally an English surname for a person who played the harp or made harps (source: BehindTheName.com) and is often assigned to boys as well as girls.

This is hilarious. Keeping with the theme of my blog, I wondered if Katy Perry was really born Katy or is it a nickname? Turns out, she was born Katheryn Elizabeth Hudson (Source: http://en.wikipedia.org/wiki/Katy_Perry) and uses the stage name Katy Perry to avoid confusion with Kate Hudson. Perry is her mother’s maiden name. 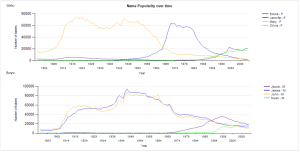 When I was a kid in school, there might be more than one Amanda, Sarah, or Jessica in class, and every Matt in college seemed to have a nickname because there were so many. My parents (born in the 50s) talk about all the Marys, Johns and James in their classes.  Nowadays, people say “don’t name your kid Madison or Madelyn, there will be 5 Maddie’s in one class alone” but is that really true? Seems like there is more of a variety of names today which would mean that giving your kid a popular name would mean they might not have to contend with being Olivia K. instead of just “Olivia” too often. Looking at data from the SSA, which releases all the baby names assigned since 1880 (as long as it occurred at least 5 times in a year), it would appear my hypothesis is true. Of course, this data set is lumping all names assigned across the entire US, so fortunately they do release data per state, which shows that certain states, especially western ones like Wyoming and Nevada, have much fewer distinct names. I would guess this has to do with them being less populated and less diverse. States like New York had a greater variety and I even noticed many Jewish-sounding names in the list. I read here that Utahns tend to be extra creative, perhaps to help their kids stand out in a culture of super-size polygamous families. I nodded my head when I read this, thinking of the Brown family on Sister Wives– they’ve got 17ish kids with names like Mykelti, Aspyn, Dayton and Paedon. In the end, naming your kid Olivia might mean that in many areas, they will be the only one in their class, but in other areas they might have to take on their last initial.

The graphs above show how popular names today are not as popular as you would think. In each, I compare two of the most popular names of 2013 compared to two extremely common names in the past. I cannot believe how popular Mary was and how little the Olivia and Emma lines are next to it! Note that I picked names with fewer spelling varieties to make this as accurate as possible, like Emma is usually spelled Emma, whereas Sophia can also be spelled Sofia. People back in the day were not as creative with how they spelled names. Grouping names together by similar spellings is something I’m still working on (it’s somewhat of a manual process).

It’s also crazy how many boys were named John or James.  Over 94,000 named James in 1947! Approximately 11.5% of all boys in 1947 were either John or James!  No wonder my dad, James, had nicknames growing up, whether it being something like Jay or Jim or a nickname based off of his last name.

Nov 21, 2014 marks the beginning of my blog. It’s actually November 20, but it’s past midnight, which is a sign I should not be putting together a fabulous post, but going to bed.

I plan to use this site to post fun data graphs and analysis I’ve done, but also mix in some posts about some of my favorite topics- tennis, snowboarding, documentaries, theology, etc. I love when I come across interesting things when querying databases and wanted a place to share them with others.  I work as a software and database developer and love working with SQL Server, SSIS, SSRS, and database and visualization tools. I also have several years’ experience as a .Net developer.